Barbara Kingsolver says in Animal, Vegetable, Miracle: A Year in Food, “Our culture is not acquainted with the idea of food as a spiritually loaded commodity. We’re just particular about which spiritual arguments we’ll accept as valid for declining certain food. Generally unacceptable reasons: environmental destruction, energy waste, the poisoning of workers. Acceptable: it’s prohibited by a holy text.” (p. 67). I say both our land and the food produced on that land must be treated as unequivocally holy!

As I began to read Animal, Vegetable, Miracle, I felt that the spirituality and holiness she describes is at odds with who does and doesn’t have accessibility to green places including farms. Certainly, the upper middle- or upper classes could pull off living off the land as an experiment.

I had another response to the book: I realized I shared some of Kingsolver’s ideological and practical concerns about American foodways. Louisiana Voices defines foodways as, “obtaining, preparing, serving food and stories and beliefs about food.”  Perhaps considering some of these concerns could be a bridge to the spiritual and holy when it comes to land and produce.

Stepping back a bit, Kingsolver describes the purpose of her family’s foodways journey and book: “We wanted to live in a place that could feed us: where rain falls, crops grow, and drinking water bubbles right up out of the ground. (p. 3). She got away from a life in Tuscon where distributors ship in food from far-away places and water is running so low that in the near future it will not support the existing population. Here are the costs: fuel must be purchased to ship the food and when water is diverted to desert places like Arizona someone else has diminished access to water.

Kingsolver and her family moved from Arizona to the southern Appalachia to live off the fruits of their labor on a farm and limit their purchases to local farmers. The Kingsolver clan made it sound relatively simple: relocate and then experiment on the land for a year. 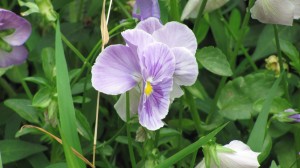 Let’s think it through. “A Year of Food” requires resources, which includes money for expenses, and comfortably owning or renting a working arable farm. Before actually arriving at a farm, the average working- to middle-class family would have to turn on the utilities in a new home–that would be the farm–which could be a challenge. One might ask: Can they afford the gas for the car to make the move? What about motels and food on the way? Can they pay the start-up for some of the utilities? Will they have to physically go and pay with cash or a money order to turn on utilities because of a poor credit rating that does not allow for easy transactions by phone, mail, or the internet? These are real questions and concerns for people living pay check to pay check. Forget actually getting to the point of owning a farm. Most people are not privileged. Kingsolver and her family already own a farm.

Class is a factor. So too is ethnicity. The farm families around her were probably predominantly white though she is not explicit concerning this point. There is a tension here for me. I grew up in Queens, New York in Rosedale, a working class neighborhood of people of African descent. Later as an adult, I lived in Lawndale, California in a working class Latino neighborhood. I’m not sure if many of the people in either ethic group would readily relate to Kingsolver’s agricultural experiment. Some who work the land to survive might see it as a working holiday. The ethnic disconnect and lack of diversity was problematic, typical of broader environmentalism, including the foodway movements.

With that said, Kingsolver gives the reader much to think about through her beautifully written prose. Many of her suggestions are achievable without going through the financial duress of relocating and purchasing a farm. Consider two ways or reconfiguring Kingsolver’s experiment for regular folks with finite resources.

Green tomatoes: it's only June.

So there is a bridge between Kingsolver’s experiment and incorporating nature into the daily lives of regular people.

Kingsolver develops a parallel argument: when the oil runs dry, and we have to return small-scale agriculture to sustain ourselves, we will not have the skills to produce much needed food in rural settings.

Perhaps if we resolve to treat the land and our food as edible holy objects, we can save the planet for our children.

Photos by Dianne Glave Except the Book Cover