Hatchling on a Memphis Sidewalk

Walking in Memphis along a tree-lined street, I noticed a hatchling on the ground. That baby bird had some big feet disproportionate to its body. I stopped. Of course, I stopped. Frightened with three people hovering over it, the bird kept moving and hopping. It was directionless, lost, and vulnerable.

I wondered if a cat would ultimately get my bird. Some wild animals like foxes make their way into downtown Memphis so who knows what else awaited the hatchling.

Eventually, I walked away looking back several times at the bird. We reached Methodist Hospital, our destination, but I was still thinking about that bird. Maybe I should have tried to grab it, find the nest, and put it back.

At  the hospital, I took the elevator with an elderly woman who reminded me of my grandmother. She got off at her floor and looked around lost hauling her oxygen tank. I said to my colleagues as the doors closed, I should have gotten off and helped her. Another moment, another chance missed. She reminded me of the bird–directionless, lost, and vulnerable.

In the hospital finally at a meeting, I was in a pensive mood. The colleague we were visiting had a pile of little finger puppet on his desk. Someone picked one up. Another said something about the puppets. My colleague, the host of the meeting, picked up the Gandhi finger puppet and said, “That’s for you.” I held it in my hand. Put it on my finger. I said, “Why Gandhi?” He said, “You know, environment . . . justice . . . the thing you do.”

Stepping  out the building the grandmotherly woman was waiting by the door probably for her ride. She was making it through ok.  My colleagues and I walked back to work and the hatchling was gone. Who knows what happened to my baby bird. Maybe it made it.

I shoulda. I coulda. I am certainly no Gandhi but in the struggle, I need to move from thinking to acting like the great man. That thing I do responding to the bird, the woman, to creatures, to people.

Don't Splice the Duck with Humans

I went to a matinée of Splice, thinking I was going to see a by the numbers horror film. The film is frighteningly more. It is a morality tale of arrogant humans playing at being the maker and abusing genetically manipulated creatures.

In Splice, Elsa (Sara Polley), a young woman, ranks as one of the most evil characters I have seen on film or television, or read about in literature. Elsa’s cool calm rationality, a scientific façade hiding behind her damaged psyche (yes, mommy issues!) is more chilling that an ax murder. Elsa operates outside the law and ethics to bio-engineer a creature from the spliced DNA of human and animal genetic material. It is unclear what animals are spliced in the experiment but Dren, the engineered creature, has legs, wings, and eyes like a bird, and a tail with a poisonous spike like a stingray.

Spliced with a Flower or a Vegetable? Hmmm.

The question for me throughout the film is who is evil? Is it Dren who does abominable things or Elsa and boyfriend Clive (Adrien Brody) who play god and manufacture evil. Much like Mary Shelley’s Frankenstein, the creation is both a sympathetic and evil character. The film is also a homage to the monsters in the Alien and Species movies.  So who or what is evil: the makers or the creature?

Throughout, Elsa and Clive have crossed ethical and legal boundaries but forge ahead. Ultimately, they fall prey to the evil they created. You’ll have to see the film to understand what I mean.

As we continue to test the boundaries of genetic engineering, looking back to the bad and unethical science of the past, who or what is our nightmare and danger? 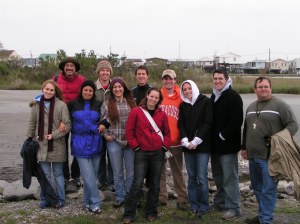 That's Me in the Blue and Black Jacket With Students , Louisiana Coast Marshland, March 2005

I once birdwatched. In 2004, when I lived in New Orleans, I saw so many waterfowl in the springtime. One day, I spotted a bird with white feathers, yellow toes, and a black beak at Audubon Park in uptown New Orleans. A small part of the park, had a bit of marsh filled with birds, if I remember correctly. The Mississippi River wasn’t too far away either–probably less than a mile–another draw for birds. So it made sense that I spotted this waterfowl uptown. So ok, the bird had me intrigued: it was pretty.

I quickly ordered a laminated chart of southeastern birds and a bird guide. I learned that it was a Snowy Egret!

I kept the guides in my car so when I saw a bird that caught my eye while driving around southern Louisiana, I could identify it. Who knows where my guides ended up when I moved from New Orleans to Atlanta. I tried rooting around some closets to find them. No luck.

I had completely forgotten about my brief interest in birds until I picked up John C. Robinson’s  Birding for Everyone: Encouraging People of Color to Become Birdwatchers. Although the book is for everyone, Robinson does focus on African Americans. Many people often ask why African Americans do not enjoy the great outdoors, why they don’t embrace nature. Robinson gets more specific detailing why people of color, including African Americans, are not birders or birdwatchers.

Robinson also alludes to fear of wild places. And I would add a form of racism on the trail when whites stare at blacks who actually make it outside is a deterrent. And perhaps some would say birds were meant for plucking, cooking, and eating not watching.

I say give it a try. Hey, I identified a Snowy Egret all on my own steam.