Yes, sometimes you have to go downtown to PENN DOT (we called it Motor Vehicle in Queens, NY). And that “work” trip turned into an an urban adventure. Walk! Walk! Walk! 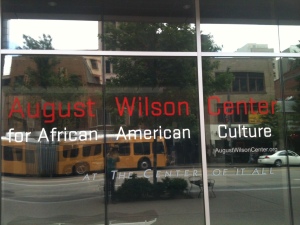 I KNEW I was in downtown Pittsburgh on a weekday in the noon hour when I was cussed out by someone. Up. Down. In. Out. That’s city life. With the good comes the bad.

So some good. People filled the streets, the concrete and asphalt teeming with people. I passed an African American man seated drumming on a corner. There’s often so much more ethnic diversity at the center, the downtown then on the edges, the suburbs.

In the parking garage, I ran into a woman from Johnstown, BEYOND Pittsburgh. She was all a-jitter about to step to the city streets. She wasn’t used to the city and talked about getting lost getting into the city, asked if the 1st floor was street level, and finally wistfully asked me as we parted was this her floor. I gave her a few words to soothe her before she fluttered off into beautiful chaos. I launched her off into the hectic city and said, “Try walking around after you’ve found your destination.” I hope my suggestion did not fall like seed on fallow ground. I hope she gave downtown Pittsburgh a try. Dance with the city. Dance with the city.

Here’s some Los Lobos, which is what makes me think of cities across America–a love song.

If you don’t live in a city, take a deep breath and give it a try. Launch off. Dive in. JUMP.